Over recent years, the ‘fundraising moment’ has become more and more significant. There have always been emergency appeals and reactive fundraising. But a combination of the speed of social media and changes to the way people interact with causes and content create the potential for virality and fundraising moments that really take off. You only need to look to responses to the Australian wildfires and the coronavirus pandemic to see this in action.

Donating online has changed significantly with the advent of people giving not only to charities but to content creators via Patreon and crowd funding campaigns, which are more about supporting something that relates to your views, interests or identity than a traditional charity brand.

Social proof now plays a key role in digital fundraising. In many cases someone who sees that their mate has donated to a fundraising ask on an issue they care about will be more likely to donate than if an organisation tells them to.

Donating as an expression of belief

Donating is now often a tangible expression of social or political belief. It can send a signal and demonstrate a position on a current issue. If a Government is failing to tackle the climate crisis and you donate to Greenpeace or Friends of the Earth or if an attack on Gaza happens and you donate to Medical Aid for Palestinians, those are arguably political acts.

As fundraisers, we spend hours honing wording, selecting the right images and thinking about supporter journeys and stewardship, but responding to unfolding events is the absolute antithesis of this. Expediency and catching the public mood are of greatest importance. In these instances, the organisations that can be most fleet of foot are favoured. The more agile your sign-off processes, the greater the chance of success.

With a fast-moving online culture and a fundraising landscape driven by issues rather than traditional notions of ‘charity’, donating is a way of taking meaningful action. It sits alongside attending a protest, lobbying an MP or taking direct action as a tangible act of support that an individual can do.

Working reactively can be a change from the norm and really give fundraisers the sense of being at the heart of something that is live and relevant. But at the same time, we all also have annual targets and long-term strategic goals to hit.

For me, fundraising and tapping into the beliefs and appetite for social change of your audience are two sides of the same coin. You need to be giving your existing and new supporters meaningful actions and content to build a relationship with them, keep them interested and loyal, as well as responding to key moments as they arise.

WWF quickly raised £500,000 in the wake of the Amazon fires and this rose to over £1m in a matter of weeks. While being a big brand helps with this – you also need a certain amount of virality which can’t be predicted. Being able to respond fast and not be bogged down with process is key to maximising your chances of success.

Planning for the unexpected

No matter what your cause, it’s important to understand when potential ‘moments’ might occur. Whether they relate to geo-political situations in certain parts of the world, climate talks or the results of an election, it’s important to be on the front foot with knowing when and how your issue might catch the public mood, as well as how you will respond to those entirely unpredictable moments or events.

The coronavirus pandemic has upended planned fundraising activity and project delivery. At the first Fundraising Space webinar, Hannah Winter from Refugee Action spoke about how not only their service delivery had to shift dramatically to move away from a model reliant on face-to-face meetings but how their supporter engagement strategy has had to quickly respond and change too.

Refugee Action realised immediately that their plans needed to change fast, so within days they launched a targeted appeal to support refugees during the pandemic. Turning a crisis into an opportunity, they have raised over £125,000 from new and existing supporters with the bulk being donated online. By recognising the need to be responsive, acting quickly and embracing not only the challenges but the opportunity, they were able to succeed at a challenging time.

A good reactive fundraising strategy also considers implementation, particularly tailoring your content as much as possible to the different platforms and media you’re using. This can be a tough call when working reactively ­– but knowing how to use paid media and organic social content to get the greatest effect is a key ingredient for success.

The changes to how people donate, take political action online and generally engage with content present distinct opportunities when potential fundraising moments arise. But only organisations that have got on the front foot with planning their response to this are making the most of it.

Planned activity will always be the backbone of our fundraising programmes, but the ‘fundraising moment’ is in the ascendancy and in turbulent and uncertain times, there are only likely to be more. Responsive online fundraising will continue to be a key way of reaching new audiences who can then be engaged for the long term. As fundraisers, it’s essential that we don’t let these opportunities slip by! 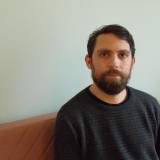 Andrew has been a fundraiser since 2008. In that time, he’s specialised in individual giving, increasingly in the digital space. He has worked for organisations including Liberty, Global Justice Now and Emmaus UK among others. He has also been a freelance individual giving consultant.

Through his practice, he has developed a specialist understanding of fundraising within the context of campaigning organisations. He is passionate about creating progressive social change and using giving as a route to doing this alongside campaigning.

As well as being a co-founder of Fundraising Space, Andrew has been a fundraising mentor to several organisations through the Small Charites Coalition mentoring scheme. He has also contributed think pieces to Third Sector and is a board member of Global Justice Now.